Andy Samberg - is looking for movie gigs? (In USA Today) 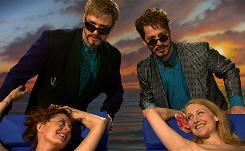 NBC's Saturday Night Live gained comedic relevance this year with Tina Fey's high-profile parodies of Sarah Palin. But the biggest splash of the 34th season, which wraps up Saturday (11:35 ET/PT) may have been made by Andy Samberg, the scruffy cast regular best known for his off-the-wall videos.

"Andy's range is amazing," says executive producer Lorne Michaels. "I think he's just coming into his own on the show."

"I think (Sarandon and Clarkson) knew the material was a bit raunchy," Samberg says. "But they were completely on board."

The shorts, often intentionally amateurish, are the latest series in a tradition that stretches back to SNL's1975 launch.

On Sunday (today), Samberg hosts a prime-time compilation of SNL shorts, including such classics as Mr. Bill, on Saturday Night Live Just Shorts (9 ET/PT). And later this month, he'll host the MTV Movie Awards (May 31, 9 ET/PT).

Though some view Samberg's video efforts as coarse and politically incorrect, the videos have struck a chord with the show's core audience, helping boost this season's average viewership to 7.7 million, up 46% over the 2007-2008 year.

They also have evolved into viral Web sensations. Samberg-Timberlake collaborations — including last season's infamous gift-in-a-box duet — have attracted more than 60 million collective views on video-sharing websites such as YouTube.

"We try to create an environment for anyone to feel goofy and silly. We've been incredibly lucky," says Samberg, who shoots the videos on the fly with Jorma Taccone and Akiva Schaffer, his junior high school buddies and partners from his Lonely Island comedy troupe who were signed as SNL writers when Samberg joined the show in 2005. The trio soon created their first Internet megahit, Lazy Sunday.

Samberg, 30, says he hopes to lasso former cast member and guest host Will Ferrell for a video this week. Samberg starred in Rudd's film I Love You, Man and supplies a voice in September's animated Cloudy With a Chance of Meatballs. The Berkeley, Calif., native plans to take some time off when SNL goes on summer hiatus.

But he's open to other gigs: "Hey, what's up, filmmakers out there?" Samberg says.

Email ThisBlogThis!Share to TwitterShare to FacebookShare to Pinterest
Categories: Text_Interviews_09